In 1975 Paul Hoffman purchased a small candy shop in Lake Worth, Florida. His goal was to start a business that combined his two great loves, homemade chocolate and spending time with his family.

Donate A Backpack And Get A Free Sundae!

Sign up for Hoffman's updates to receive information about new arrivals, future events and specials. 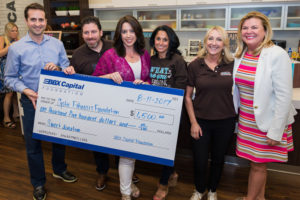 Hoffman’s Chocolates held its Ice Cream Sundae Competition – Making Sweet Creations for Sweet Donations at Hoffman’s Chocolates/ BBX Capital’s corporate office on August 11. Seven nonprofit organizations each partnered with a Hoffman’s store manager to create a special ice cream sundae for the competition. A panel of five judges determined that the Cystic Fibrosis Foundation’s (CFF) Crunchy Monkey Peanut Butter Bang sundae was the winning combination. Taking home first-place, CFF will receive a donation of $1,500 from Hoffman’s Chocolates and the opportunity to have its winning flavor featured in all Hoffman’s Chocolates stores.

The Crunchy Monkey Peanut Butter Bang sundae will be featured in all stores from August 21 through September 4 (excluding the Fort Lauderdale/Hollywood International Airport store). The masterminds behind this delicious sundae recipe were Darlene Eddy, Hoffman’s Chocolates Plantation Store Manager, and Christina Landshut, Executive Director of the Cystic Fibrosis Foundation South Florida Office. In addition to the initial donation of $1,500, Hoffman’s Chocolates will make a second donation to support the mission of the Cystic Fibrosis Foundation.

“This is our second time holding our summer ice cream sundae competition, and it’s a really fun way for our store managers to make meaningful connections with leaders of various nonprofit organizations in our South Florida community,” said Lois Marino, Director of Community Engagement for Hoffman’s Chocolates. “The way we set up the competition, every participant walks away with a donation, so it’s a win-win for all organizations and a feel-good event for us.”

TOP
Accessibility Menu A- A A+

WHAT ARE YOU LOOKING FOR?

Enjoy the benefits of registering:

This is an approximate conversion table to help you find your size. If you have already purchased an item by our brand, we recommend you select the same size as indicated on its label.

Do you want to add products to your personal account?